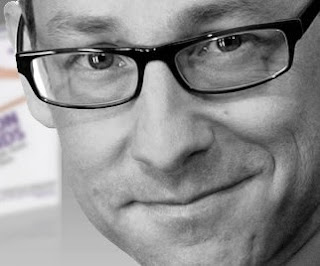 I should've spent a bit more time researching the person I was to meet in Paris during "The Tour"- but being frazzled and preparing for it all ... 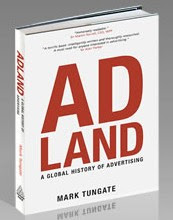 The gentleman was Mark Tungate - and somehow or other I'd 'won' a copy of his book ADLAND. And I wanted it. I'm a sucker for any sort of history of advertising (as attendees of my presentations know, for I make them suffer through my own skewed, polemical version of it).

He was ready to send a copy - but I proposed a counteroffer: let's meet in Paris and exchange books.

I got the better deal.

Mark Tungate, I find out after our brief rendezvous at Bayard Presse, after returning home and reading his book, after jumping on the web and scurrying around, after emailing a few friends in France and England, is a heavyweight in the ad world. He's written a bunch of books, loads of articles for advertising and general interest magazines, has a TV talk show. He puts together the text for an 'everybody in the industry has to pour over it every year' annual overview of European advertising.

When we met, I had just finished a presentation, was tired, dizzy from adrenaline de-rush, and fumbling around. My more-significant-than-I-am other was with us and, I could tell, became more and more annoyed that I wasn't paying attention. She's smarter than I.

ADLAND: A Global History of Advertising is a worthy successor to my favorite history of advertising tome, The Mirror Makers by Stephen Fox. And, as the title says, it's not U.S. myopic.

What did I know already while reading ADLAND? Most of the U.S. stuff, maybe a little less than half of the U.K. stuff, a smidgeon about France, a dollop about Italy 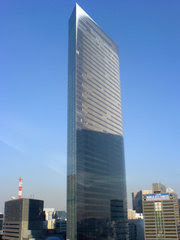 (actually more, since I worked on an Italian brand for a few years and had done some research), zip about Japan (except that Dentsu has a big building and they love to fly over American movie stars and pay them an absurd amount of money to hold up bottles of whatever - although according to Mark that silliness has run its course), zip about Spain, a little about Brazil and South America. I knew a lot but also learned a lot about the 1990s creative revolution in Amsterdam.

Then there is the obvious: Mark Tungate is an accomplished writer - so here's a business/history book wonderfully conceived and composed and fun to read. How often do you find that to be true?

Likewise no surprise to me: ADLAND has been selected as a classroom resource by The Advertising Educational Foundation. Which means that that Tungate has joined the advertising book-writing immortals such as Lawrence, Dusenberry, Fallon, Roberts, Nyren …..

The company keeps getting better.


Update: Listen to Mark's interview on The Advertising Show (scroll to the sound files)
Posted by Chuck Nyren at 10/28/2007