The Boomer Century on PBS 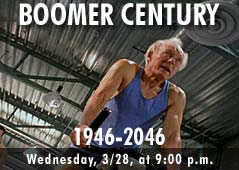 “The Boomer Century: 1946-2046” is a two-hour documentary that looks to the baby boomers’ past for clues to how this generation of 78 million Americans will shape the future.

Of the half dozen or so reviews I’ve read – well, they’re weird. They review Baby Boomers, not the show. Actually, that’s par for the course. The same thing happened with Lenny Steinhorn’s book. A strange phenomenon – reviewing the subject and only making passing references to the book.

Here’s an actual review of the program by Brian Lowry in Variety. I culled a quote that’s perfect for this blog (and, I wish, had been around earlier so I could've included it in my book):

On the down side, scant time is devoted to the manner in which the boomers are discounted and dismissed by Madison Avenue, which has too slowly come to recognize that boomers approach aging differently than any generation preceding them. Given how rarely this disconnect is vented publicly, it seems like a missed opportunity in the near-ad-free environs of PBS.

So enjoy the show. Or hate it. Or use it as a night light. I guess we’ll all find out which it’ll be if we tune in – because it's certainly difficult to tell beforehand by reading most of the reviews.
Posted by Chuck Nyren at 3/28/2007