I took the attendees on a wild ride around the globe, stopping in the U.K., France, Belgium, Germany, The Netherlands, Norway, Spain, Canada, The U.S., Australia, and Japan. We critiqued all sorts of TV spots, web sites, and print ads.

Then we settled in Turkey.

Most attendees were from the country’s thriving, boisterous financial sector. A major concern: Baby Boomers and older in Turkey have not warmed up to online banking and financial services. They make an attempt - but soon become frustrated, returning to their old ways (needless trips to the bank, using mostly checkbooks and snail mail, etc.). They are simply not online.

I couldn’t dig too deeply into hierarchy and usability issues – although I did talk (almost endlessly) about graphic design and how important it is for older eyes. Instead, I offered a bit of motivational marketing.

In the early 1980s, Turkey’s government loosened its (almost total) grip on the economy and freed up manufacturing and banking resources. The economy slowly gained momentum. Today Turkey is an international economic powerhouse.

A gentleman brought up all this during a break. I knew about it, but thought it might be too hot a political potato and decided beforehand not to talk about it. He convinced me to toss it around the room.

My idea: Folks now in their fifties, sixties, and early seventies were the thought-leaders and workers who accomplished this unprecedented economic growth. It’s something they are and should be proud of.

In your advertising/marketing campaigns, make the connection between these economic achievements and the recent growth of the internet. They will feel as if they are not only a part of the technological revolution, but helped make it happen. Their accomplishments are the reasons Turkey is a major player on the world stage.

Of course, you wouldn’t simply say all this. Marketing and advertising creatives would come up with vivid scenarios to tell the story.

There are 15 million people living in Istanbul – and I think I saw all of them.

And I met about two dozen of the brightest.

My day-long workshop/presentation International Advertising And Marketing Techniques Targeting Baby Boomers went very well.  The graciousness of the Turkish people is unparalleled.  Thanks so much, IMI Conferences.

First off, thank you for the workshop last Friday, we learnt a lot. I hope your trip in Istanbul went well.

This way, we can share it with our colleagues.

I don’t know what their takeaways were, but here were mine:

Truth is, you can analyze marketing fodder all day and night, read countless books about marketing to Baby Boomers, attend advertising and marketing conventions around the world, and soak up everything all the experts have to say. Much of what is out there is valuable and useful … But if you plan on implementing a creative strategy and turn it over to a different generation of advertising professionals—you'll forfeit the natural sensibilities required to generate vital campaigns.

March, 2010 - NostraChuckus' prediction comes true, as he picks up a new disciple:

When can you understand what it's like to be an over 50 consumer? Not one minute, hour or day before your 50th birthday. Creating messaging for the 50+ target is no different than creating it for the Hispanic target, the African American target or the gay target; to do it right and well requires experience being a part of that target.

Of course, NostraChuckus always knew it was about diversity:

The Trouble with HR
When I received copies from my publisher, cracked open one, and finished it, I had a minor epiphany.  “This is really a book about HR.”  Kind of a shock, since I certainly didn’t plan it as such.  I’m one of those creative types, not a Human Resources person.
Since then, diversity has become a mantra. 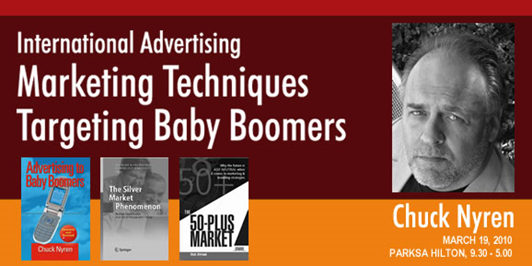 Special Thanks to Gill Walker of Evergreen Marketing for emailing me great stuff from Australia, Dr. Florian Kohlbacher for sharing a yet-to-be-released white paper on advertising in Japan, and Maxime de Jenlis of Bayard Presse for shipping copies of Notre Temps and PLUS Magazines from France, The Netherlands, Germany, Belgium, and Spain so I could scan ads from all over Europe.

If you can’t make it to Istanbul, you’d better be here instead:

Plenty of blogging when I return.

The Aging Brain Is Less Quick, But More Shrewd
For baby-boomers, there is both good news and bad news about the cognitive health of the aging brain.

I’ve blogged about Dr. Gary Small a few times (and read two of his books):

Your Brain on Games

All this fresh info is now a slide in my presentations, with bullets (and citations):

We are good at:

•  complex reasoning skills
•  anticipating problems and reasoning things out
•  empathy, having the ability to understand the
emotional point of view of another