As I reach my late-middle 50s…

An amusing, too truthful piece by Michael Winerip of The New York Times:

Aging by Megabyte
AS I reach my late-middle 50s, I am, for the first time, feeling old. I don’t mean physically old. I have aches and pains, but I’ve been blessed. My health has been good … I have four children ages 14 to 20, and once they hit the teenage years, a primary purpose in their lives has been to tear their once-godlike Dad down to bite-size.

It reminded me of a silly thing I wrote a handful of years ago:

The Slobberer
Without a hint of fear she reached up and pulled down on the sides of my mouth. "Ahhh," she said with a nod. "You drool."

I twitched and tried not to shudder. "Are you sure? I'm not even in my late fifties yet. I’m in my … earlier late fifties.”

And in my book Advertising to Baby Boomers (2007): 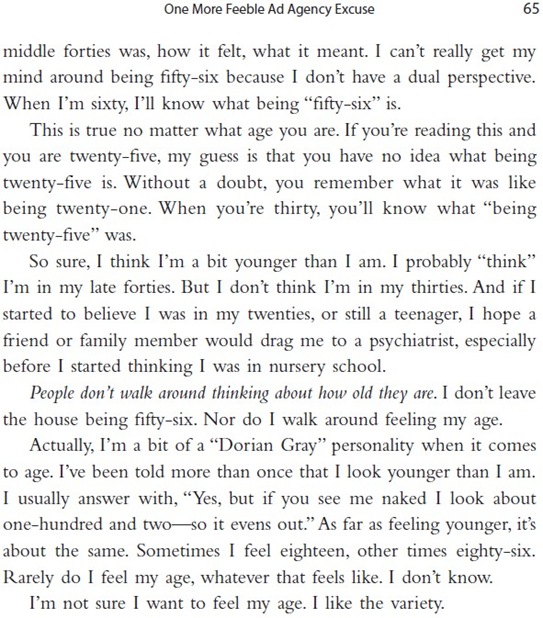 Spring would arrive, we’d be out at the ball field once again, I’d be hitting them flies, and the three boys would be edging toward me, yelling, “Remember when you used to hit them far, Dad? Remember that, Dad?”

Why couldn’t it have been…?

A couple of Depend spots – click the picture to view:

Kimberly-Clark Launches Largest Campaign Ever For Its Depend Brand
…One of the key elements of the new campaign is a certain level of authenticity -- showcasing real people, since this is such a real issue for so many people…

But why aren’t these spots sending you to the web site?  There are dozens of previous posts that talk about this. Here’s just one:

Snake Oil In Cyberspace
For the umpteenth time …
The Most Effective Marketing/Advertising Model For Reaching Baby Boomers: What is now called traditional advertising pushing you to an age-friendly, informative product/services web site.

I guess what upsets me about this campaign is not the campaign itself.  I like it.  I see people around my age – they’re entertaining, loose, funny. I’m wondering what the payoff will be. What a letdown.

Why couldn’t it have been a car?  Laundry soap?  A computer?  A razor?  Anything but some age-related malady:

Use only as directed
By Joseph P. Kahn

So the Depend campaign gets an A for creative, C- for marketing.

And looking at the big picture – let’s hope that ad agencies will see these spots and realize they’re missing out not hiring people over fifty to create campaigns for just about any product or service.

Or should clients put pressure on their agencies?

An excerpt from Advertising to Baby Boomers:

This is where I link to a news story – but that’s the story.  There is no story.  I can’t find a thing about it in the trades or any other news sources.  Find it for me.

Why did JWT BOOM go belly-up?  I have my own theories, some I’ll share and some I’ll keep to myself.

… I also meant to tell you that you apparently have really good sources. We finally heard from **** ******* that JWT Boom is closed as of today …  Apparently JWT is closing all of its specialty agencies … And I heard it from you first!

Was JWT BOOM simply a victim the worldwide financial crisis? Maybe, maybe not.  I’ve talked about Baby Boomers and the economic collapse in a blog post last year and in an online presentation:

General Mills Thrives on Increased Marketing Spending
"When I started here in 1983, we didn't do much advertising to baby boomers," he said, adding that boomers are eating more cereal as they age. "We're targeting them directly now."

Christopher Simpson brings us up to date on Ad Nauseam, citing a recent study by NeuroFocus:

Oh, so now they're turning to Boomers
If nothing else good comes from the recent economic crisis, at least we have the faint hope that advertising can become more adult.

And rumor has it that another Boomer-focused company underneath the WPP umbrella is about to kick the bucket.

More from the email:

…  Ad Age says today that the Chicago JWT office is closing. I have a feeling that JWT is not long for this world …

JWT GOES BELLY-UP.  Hmmm.  I bet that news would make the trades.

Word’s out that Ann Harwood wowed them with her exhaustively researched dissertation on higher learning and experiential travel at The 2009 Aging in America ASA-NCOA Conference:

Original Academic Research on Boomers & Lifelong Learning
“The findings of this study reveal the threads of interest in social responsibility work by Boomers and older adults. Higher education and lifelong learning institutes are in the prime position to provide leadership, college courses, training and programs that will empower these curious Boomers and hardy elders to give back to society by working in fulfilling jobs for the rest of their lives,” reported Harwood. “Social responsibility disciplines include human services, healthcare, education, environment, arts and culture management, and nonprofit community leadership ..”

I’ve written about these subjects in my book and here in the ether. A handful of related blog posts:

Boomers, Vacation, Travel (2006)
Over-50s make excellent volunteers as they bring with them different life skills and a different outlook to younger volunteers.

Me vs. We (2008)
Will boomers really give something back? They already are. Nationally, boomers (33%) have higher volunteer rates than either seniors (24%) or young adults (24%), reports the Corporation for National and Community Service. This is the most schooled and traveled generation in history. It has much to offer by the giving of its time. The number of American volunteers rose to 65.4 million last year from 59.5 million in 2002. It is projected to reach 70 million by 2010, driven by aging boomers who want to make a difference. (USA Today)

Cookie-Cutter Cavalcades (2009)
So you've escaped middle age and are ready for the long calm of retirement. What next? If you spend too much time rocking on the front porch, will your brain droop into autopilot? One antidote for this is educational travel. (AP) 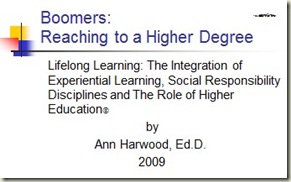 “The majority of people in the boomer age group are interested in getting training for work in social responsibility … Eighty seven percent (87%) of The University of Montana and sixty seven (67%) of Elderhostel respondents favor tax credits for training and/or working in public or community service jobs. There is also a segment of volunteer tourism that is growing steadily where some of the program expenses are tax deductible.”

Retiring For The Night

I had a spirited chat the other day with Patricia Frank, a freelance journalist working on a cover story for BedTimes magazine:

Is your Web site hurtful or helpful?
by Patricia Frank
According to quantitative research conducted by the Better Sleep Council in 2007, 60% of mattress buyers conduct research before mattress shopping. Since 1996, the number of people “looking around in stores” and reading newspaper ads has declined steadily, while the number turning to the Internet has risen significantly.

I’ll take a wild guess that the story she’s putting together will be in the June issue:

Editorial Calendar
June 2009
Retiring for the night
The wave of baby boomer retirements is just beginning. Their lifestyles and, in some cases, their health, are changing. How can the bedding industry meet the needs of this enormous demographic group?

Carol Orsborn is also being interviewed for the article.