Let me get this out of the way…

Going Nutty Over Older Women’s Bodies (Huffpost)
… With younger bodies ... they’re the same from top to bottom. Same shape, same skin, same rubbery feel. Nothing much there. Unfinished, incomplete. Like they were just hatched from pods - smooth and slippery, no essence yet. And only a few curves and barely any crannies. Bland and simple. Uninteresting.
Older bodies are complex, real.

Ten, twelve years ago there were older women. Now there are older women younger than I am. Weird. It’s some strange time/space warp I’m living in.

One of the first advertisements targeting this demo featured in a 2005 blog post by Brent Green:

A Heroine for Our Time … Fidelity Investments recently unveiled a 30-second television commercial that presents the biography of a Boomer woman. In this frenetic, flowing montage, augmented by rapid cuts of iconographic images such as the "peace sign," Fidelity has effectively captured powerful elements of the Boomer zeitgeist. 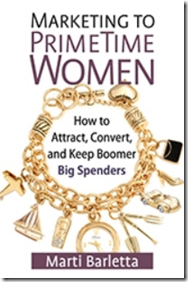 Marketing to these lovelies was written about by Marti Barletta over a decade ago, wisely updated years later:

And there was BOOM: Marketing to the Ultimate Power Consumer by Mary Brown and Carol Orsborn.

Worthwhile articles by a slew of others followed, including over one hundred posts by yours truly.

Lately, there’s a renewed interest in mature women. In Joseph Coughlin’s The Longevity Economy, a huge section is dedicated their power and influence.

JWT in the UK has put together a fancy-schmancy PDF slide presentation:

The Elastic Generation – Female Edit
Women in their 50s, 60s and early 70s are active, engaged and involved. Pillars of family, community and society, nothing they do is motivated by their age. It’s time for brands to take age out of the equation …

Give JWT a name and email address and you can download it.

Click through at a fast pace - and it’s a good show.