Tablets & The Magic of Muggles Whenever immersed in fantasy-drenched fiction you sustain the illusion that there are no illusions.  Everything is real.

I remember watching this and saying to myself, “Is this supposed to be magic?  We Muggles already have this. What’s the big deal?” I was thinking computers, laptops.

Soon we will have it:

14 January 2013
Tablets Redux
… Researchers have developed a revolutionary tablet screen as thin as a sheet of paper that can be twisted and dropped without damage - and it could replace your laptop within five years. 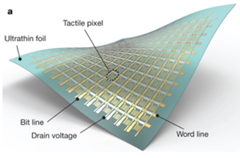 And one from a year ago:

You should stop thinking about the next big thingamabob and whose will be best.  In five or ten years there will be all sorts of thingamabobs for just about everything. You’ll have two or three or ten thingamabobs.  Tablets/Smartphones will be big, small, thin, simple, complex, active, passive, out the door in your purse or pocket, lost in your couch cushions.

The web is dead for advertising/banner ads:

29 April 2013
My post this week was written by The Ad Contrarian.

Tablets to outship desktops this year, notebooks next year

Shipments of Tablet PCs Expected to More Than Double
Shipments of tablet PCs are expected to reach nearly 364 million worldwide in 2014…The tablet PC market is also quickly evolving, offering more choices to a growing audience of potential buyers. Consumers can expect to see greater choice in screen sizes, as brands look to differentiate their products and exploit new market opportunities.

Oh, yeah. I said that already.

Microsoft is jumping on this, soon offering users the option of a more magazine-like experience:

…A new Reading View feature, available via a button in the right side of the address bar, can remove the clutter and present just the article in a pleasant, horizontal layout…

What all this means for advertisers:

Banner ads have been a washout, social media marketing is a cesspool, advertising on smartphones is not only teensy-weensy but competes with activity (talking/texting, apps, simple search).

Tablets could become a major vehicle for advertising.  They’ll get bigger, lighter, much thinner, flexible or semi-flexible if that’s what you’d prefer, easy to handle while sitting, lying down. Finger scrolls won’t be much different than turning pages…

And those virtual pages will have beautiful, striking, intelligent print-influenced advertising and short-form video on demand.

Larger and more crystalline than this:

People will power up desktops/laptops for work and interactive pursuits, then grab their tablets for passive pleasure.