The kids are alright.

The Generation Bashers are back.

OK, they never left.  A bit of history:

Baby Boomers were stigmatized when we were in and around our twenties, early thirties. Sure, we were ‘me’ back then. Barring tragedies like war and all sorts of catastrophes similarly horrifying, most young adults are me, me, me.

Me vs. We Redux
26 June 2009
I did read something about a bunch of pundits apologizing for the recession/depression or whatever we’re going through. Apparently, they think it’s all their fault because they’re Baby Boomers. (Did any generation apologize for The Great Depression? I’ll have to check the history books.  If not, it should.  Some of those evil bastards must still be alive.  Anybody over ninety-eight had better atone.)

Baby boomers may be popularly portrayed as whiners, complainers and narcissists, but a new study by University of Massachusetts Amherst psychology Professor Susan Krauss Whitbourne says the 50-somethings are getting a bad rap.

“It’s wrong to say baby boomers are selfish and only care about staying young,” said Whitbourne. “They have a feeling of connection to younger generations and a social conscience.”

But this is all getting old and boring.  Now the pundits have a new generation to bash.  One that’s even worse than Baby Boomers!

Young People Becoming More Focused on 'Me'
Today's young adults are more "Generation Me" than "Generation We," according to a new analysis…

Millennial Generation Money-Obsessed And Less Concerned With Giving Back, Study Finds
… Researchers have found the so-called Millennial generation to be less environmentally conscious, community-oriented and politically engaged than previous generations were at the same age… 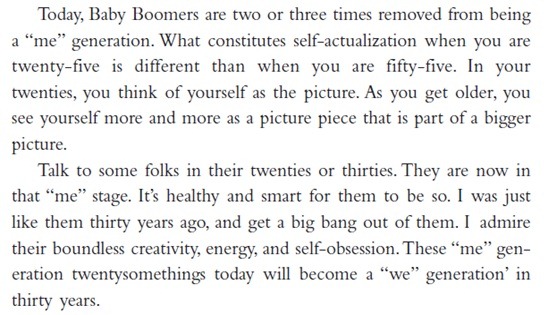 The kids are alright.