Foretellings
Social Media/Word-of-mouth advertising/marketing on the web has been a washout.

Lots of talk over the last few years about computers and digital devices and whether you’re a native or an immigrant:

How does this affect advertising creative? More fuel for the idea of a diverse workforce. Younger folks ingest and digest the world differently than older folks. So you’d better have the right guts around to trust.  If you don’t believe me, believe Rance Crain.

A parallel take on Digital Natives/Immigrants:

Baby Boomers have been inundated with technology all their lives. We were the first generation of television natives. I remember the thrill of first seeing an IBM Selectric in action – with that frenetic orb whirling and jabbing every which way like a cartoon character in a boxing ring.  My portable electric Smith-Corona became Stone Age overnight.

I first had an Apple II in the early 1980s.  A couple of bright Baby Boomers had put a typewriter and a television (monitor) together and called it a personal computer. Typewriters became Stone Age overnight. Then the-powers-that-be hooked up computers with telephone lines ringing up each other - and called it the internet.

We were there for all of it.

Originally the internet was used for military purposes, then adopted by colleges and universities. When it became available for businesses and the public it was used for  research and communication.

We were there for (almost) all of it.

In the middle 1990s commercialization was introduced. Not everybody loved this.

I remember when hyperlinks and animated GIFs were eye-popping, cutting-edge marvels. Before long video, music, and games were everywhere. That ended up as lots of fun.

But technological marvels come and go.  Human nature persists. The importance of being connected, communicating, and seeking out information has been around since the beginning of civilization.

Being connected but untethered seems to be the next phase, possibly the final one for awhile. It started with cell phones and laptops and Wi-Fi.  Now we have smartphones and portable iPads, Kindles, and who knows what’s next.

Baby Boomers are Commercialization Immigrants.  Television, radio, print, billboards – we grew up with these as advertising entities. Computers were for work, communication, research – not for commercial messages.

Researching products/services?  Oh, yes. Which is why I’ve always said: 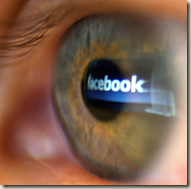 Social Networking sites are popular – but are Baby Boomers making friends with advertisers?

Anecdotal: A few recent posts on my Facebook News Feed:

“FB has too many ads … FB is becoming less interesting to visit. Hearing news from friends, finding new friends and seeing their pictures is what FB was all about. Can we get back to that, hmmmm?”

“Hide all the group posts or drop them from your news feed! That's what I do.”

“I think FaceBook should change its name to ClutterBook or CauseBook.”

“Thank you Lord Jesus Christ for answering my prayer and showing me how to rid my wall of Farmville, Garden World, Fish Life and all similar pieces of life-wasting crap. You have made my home page a heaven.”

So how can these social networks turn a buck?  I don’t know. Here’s how they’re doing it now:

The Web's New Gold Mine: Your Secrets

Doesn’t that make you all warm and gooey inside?

Which brings me back to:

The visual power of the web will fade as more people use handheld devices.  Goodbye, fancy-schmancy web sites. People will get bored sifting through it all when they can find what they need with their smartphones.

And/or their iPads.  Or whatever gizmos end up as standard issue.

Anecdotal: I’ve asked a handful of folks around my age about their smartphones/iPads. Some aggregated responses:

Do you see any advertising on your smartphone?

No. Whatever it is is too small.  And they’re always on top, which makes no sense because if I’m searching for something that’s what I look at first. If there were any marketing messages afterwards, on the bottom, my eyes might continue down and I might read them because I’ve already found what I was searching for. But they’re never there.

Do you rush home and turn on your computer?

Not much anymore. I find almost everything I need on my smartphone or iPad. And if I’m home, it’s just easier to use one of the portable devices.

This all sounds about right to me. The new pocket-sized web will be friendly to marketing, not advertising.  The desktop or laptop, when not for work, will be used for deep research, visual delights, playing games.

So where will advertising be effective?  Where it’s always been effective:

And with those huge screens, surround-sound systems at home and in cars, HD radio, and gloriously glossy layouts - advertising may be more effective than it’s ever been.
_____

Could the Droid X Replace Your Laptop?

Are Smartphones Getting Too Smart? 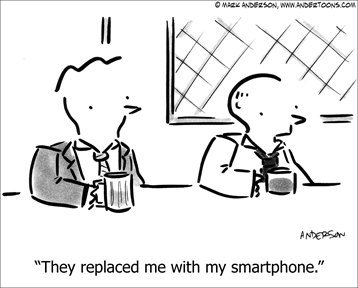