Peace is good for business. 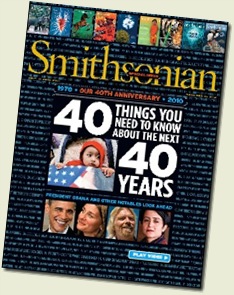 Fun and very wise issue of Smithsonian Magazine for August.

I’m guessing anybody breezing through it will stop and thoroughly read at least a dozen or more of the 40 Things You Need To Know About The Next 40 Years.

Two that will have a positive effect on business and advertising:

The Age of Peace
Maturing populations may mean a less violent future for many societies torn by internal conflict
By Carolyn O’Hara
Demographers have found that developing nations with “youth bulges”—more than 40 percent of people between the ages of 15 and 29—are 2.5 times more prone to internal conflict, including terrorism, than countries with fewer young people …

All this isn’t new.  I’ve blogged about it many times:

The longevity revolution affects every country, every community and almost every household. It promises to restructure the economy, reshape the family, redefine politics and even rearrange the geopolitical order over the coming century. (Washington Post, Fred Pearce)

While a few industries might disagree, it’s generally acknowledged that peace is good for business. Many companies around the world are gearing up for the needs and wants of an older demographic.  A good resource: The Silver Market Phenomenon.

Sabiha Al Khemir on Islam and the West
The museum curator and author predicts that relations between the United States and the Muslim world will improve
By Amy Crawford
… I believe things are changing, on both sides. The East is no longer far away. Also, this new generation, in various parts of the Islamic world, they are modern in thinking and modern in seeing the world. With all the communication that’s happening and all the opening of boundaries, the connections are there …

… People want to know, because they realize quickly enough that the way Islam has been represented by a certain minority, extremism, et cetera, is not necessarily Islam the way it is.

I experienced the above when in Istanbul last March.

Take a look at more future ‘things’ from the August issue of Smithsonian Magazine.