The Pros and Cons of Windows 7 for … Baby Boomers

I’m not a Microsoft basher.  Every so often I might rip into one of their ill-advised PR ploys or marketing campaigns.  Yes, I’ve seen this and really don’t know what to make of it:

'Family Guy' creator and Microsoft team up for Win 7 promotion

Not being a fully-fledged geek (or even a flimsy-fledged one), I have no major complaints with Vista or Office 2007.

So yours truly has been sniffing around, researching Windows 7.

One redesign pointed out by Michael Gartenberg made my middle-aged eyes shiver:

Opinion: The pros and cons of Windows 7 for business

Gratuitous UI changes
I love the Win 7 UI, but I have a lot of experience invested in the old Windows ways of doing things, and some of the changes just seem gratuitous and make no sense to me. Also annoying are on-screen UI targets that you have to hit with your cursor but that are so tiny they make you think that Microsoft is hiring a lot of young workers who have great eyesight and/or high-resolution monitors. And using Touch and fingers to navigate is somewhat of an exercise in frustration.

If true, if this UI can’t be fiddled with, I’m not upgrading.

What if everybody over fifty who walks into a store and plays with the Windows 7 UI finds it ‘an exercise in frustration’?  What if millions and millions of people over fifty purchase the upgrade sight unseen, and can’t quite get a mouse-grip on the ‘tiny’ targets?

Even if you can bump up the graphics/fonts on the interface, why would the ‘default’ setting completely ignore the largest consumer demo for this product? 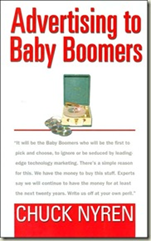 Wouldn’t it be nice (and profitable) if software designers  helped alleviate (and not aggravate) a big issue with Baby Boomers.