I was going to pass on blogging this – since Dick Stroud already did the honors:

The video was created as a way to overcome the objections that AARP heard at the forum. It is sad to say but these objections to the older market have been around since I began writing my book and are identical to the ones I encountered in the UK.

It is astonishing that people are still coming out with these lame excuses.

But a gentleman from AARP Media emailed me and wanted my take on it.

So, here’s the video and the take:

I told him it would be difficult for me to gage the impact on media planners, but was happy to note that the video didn’t do anything stupid – like denigrate the target market they’re promoting.

Way back in 2004-5, AARP was doing just that in a B2B campaign.  I wrote a chapter about it in my book, and referenced it in a post few years later:

… The advertising campaign has one ad with ashen-faced Baby Boomers in body bags ("These days, doctors don't pronounce you dead. Marketers do."). Another shows Baby Boomers acting like testosteroned teenagers ("Outta the way, punks: older racers are the hot-rod kings!").Yet another has one of a middle-aged lady dead in a powder room (probably from overdoing it on the dance floor) with police chalk outlining her body. I don't know what the copy is because I haven't seen it. It's probably something like, "Give me wrinkle cream, or give me death!"

I just couldn’t figure out how trashing your ‘product’ was going to sell any.  And even if it did …

More from the chapter: 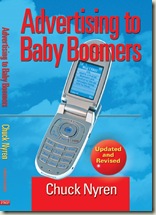 The problem is that the advertising agency, like most agencies, is very much caught up in the trendy concept of Branding (one of those buzzwords overused in the last few years, and often misunderstood), and consciously or subconsciously did a bit of branding with their client’s product.

They’ve done this by introducing and presenting the product as immature, daft, and half-dead. Quite  the  product  I’d  want  to  buy (meaning: quite the demographic I’d get all hot and bothered about advertising to).

Even if this campaign convinces advertisers and media planners to consider targeting Baby Boomers, these silly stereotypes have been reinforced and will be carried over into consumer campaigns.

The AARP Media Sales Interrogation video stays on message – so other than being a bit long, it’s fine with me.  I hope it works.