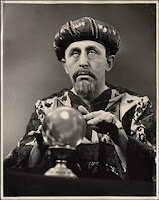 But I'll spin it so it seems as if I have magical powers. That's what prognosticators do anyway.

Did I get that one wrong. They've been popping up like mushrooms. I can't keep track of them - and neither can Dick Stroud or Matt Thornhill.

My new prediction: They'll be gone by next year. Or the year after that. Or one of these years … 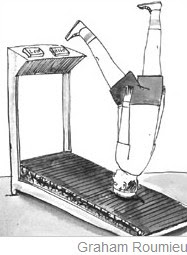 I got that one right. And I only played one brain game in all of 2006 and still got it right! I did and still do a fair amount of this, however. On my bike for the most part (walking and sex rounding out the top three). All probably as good if not better for your fossilizing noggin. Or are they fossilizing?

Three: The Death of Flogs

It's a slow death. But folks are catching on. In April I'm booked to do a webinar for IMMN. I may do it on word-of-mouth marketing and Baby Boomers. That'll cause plenty of trouble.

My prediction for 2008: I'll lose my power of prognostication because I didn't play enough brain games.
Posted by Chuck Nyren at 1/15/2008