Advertisers Zeroing in on Wrong Audience

Richard L. Conner, editor and publisher of Pennsylvania’s Times Leader, pens a piece that sounds like it was lifted from my book:

Advertisers zeroing in on wrong audience

Advertisers want dudes, though — not boomers ... And dudes fall within the 18-to34-year-old category that advertisers covet. Actually, dudes are near the precipice of the group, closer to 35 than to 18, which means that when they step over the 34-year-old line, they fall from favor. Unless you happen to be selling Depends … The biggest advertising buys are made out of agencies in cities such as New York, Chicago and Los Angeles — all places where hip young people live … These hipsters at the big ad agencies are targeting themselves when they should be going after Mom and Dad.

See if you can make it to Walter Kirn’s commentary in The New York Times Magazine before it vanishes behind the Orange Curtain:

Here, There and Everywhere
I was standing in an airport security line when I spotted an advertisement for Rolodexes printed across the bottom of the tub into which I was about to set my shoes. The ad bewildered me for a couple of reasons. First, I didn’t expect to see it there (even though, by now, I should have, since researchers estimate that the average city dweller is exposed to 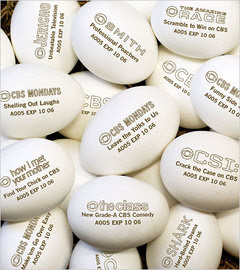 5,000 ads per day, up from 2,000 per day three decades ago). The second and greater mystery, however, was why a major company would want me to associate its product with the experience of being searched. Rolodex — the official corporate sponsor of airport paranoia.