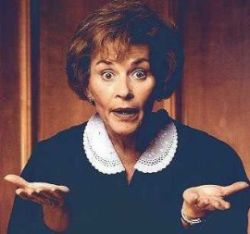 Judge Judy is on a rampage (as if she ever isn't):

During a recent appearance on "Larry King Live," outspoken television court Judge Judy Sheindlin sounded the coming battle cry of her Baby Boomer generation: "I am still relevant!" … The judge scolded Madison Avenue marketers for ignoring legions of aging Boomers like her.

I think I'll submit a case. We need a class action suit: Baby Boomers vs. Media/Advertising Agencies/Advertisers. Which is the guilty party? They all pass the buck. Or is it collusion?

And Judy's the Judge: "DO YOU THINK I HAVE 'STUPID' TATTOOED ON MY FOREHEAD??? TELL ME THE TRUTH!!!"

She'll get to the bottom of it - and find out who's really responsible for ignoring Baby Boomers.
Posted by Chuck Nyren at 6/04/2006