If you're a newsletter fan (I think of them as email blogs), there are a handful of insightful ones about advertising and marketing to the 50+ demographic:

Matt Thornhill of The Boomer Project puts together a fun newsletter full of juicy, informative stories.

The Mature Market's newsletter has links to lots of original and reprinted articles from around the world. Find out how other countries are dealing with advertising and marketing to Baby Boomers.

Mary Furlong's newsletter comes out infrequently, but is always worth the wait.

One I don't subscribe to is Dick Stroud's newsletter. That's because his blog is an every day stop for me.

There are others - but they tend to be exclusively promotional newsletters touting the companies. (I call them opt-in spam.) Who needs a slightly different ad showing up in your mailbox every month?
Posted by Chuck Nyren at 6/30/2005 No comments:

In an earlier post I talked a bit about magazines targeting Baby Boomers. Here's an interesting piece from the New York Times about Harold Whittlesey McGraw III and his accomplishments at McGraw-Hill. An excerpt:

McGraw-Hill is investigating a number of growth initiatives tied to BusinessWeek, both online and in print. One idea is a magazine aimed at baby boomers, according to several people close to the discussions.

I ran across this word in an article, rolled my eyes, and bookmarked it for some sort of comment.But lucky for me my friend Dick Stroud beat me to it, so I don't have to waste my time blogging this one. Just read his blog. 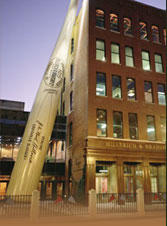 The Louisville Slugger Museum has an odd but smart (at least marketing-wise) exhibit going, Barbies & Baseball:

Baby Boomers are inveterate museum-goers. But there are so many museums. The brilliance of this particular summer exhibit is simply this:

If I were driving through Louisville with my more-significant-than-I-am Other and said, "Hey! Let's go to the Louisville Slugger Museum!" I imagine I'd get some eye-rolls, some disgusted sighing, a "...what's a louisville slugger…"

But if I added, "And guess what? They're having a Barbie exhibit! Lots of Barbie stuff and baseball! I don't quite get the connection -- maybe there's a Barbie baseball team or something -- it's hard to keep up with all these expansion teams .... but Barbie! Lots of Barbie! You remember … the doll!" I bet we'd be making a stop — and I probably wouldn't have to hear too much about it afterwards. Marketing to Leading-Edge Baby Boomers author and pundit Brent Green has finally gotten around to blogging.

The pic on the site is an apt metaphor, for Brent isn't afraid to take on all sorts of subjects - including Ward Churchill, Joe Queenan, Joe Klein, and silly (but damaging) editorials in various newspapers and magazines.

I wouldn't reduce Brent Green to simply a Baby Boomer apologist, for the Baby Boomer Generation, while getting blasted in the press over the last few years, really needs no apologists. From Brent's blog:

A few years ago, TIME magazine trumpeted "America's Best: Science & Medicine." Of 16 people profiled, only one is not a boomer. The finest neurosurgeon, the most respected biomedical engineer, academia's leading paleontologist … all boomers. Two ardent boomers led teams to decipher the 3.1 billion biochemical units of human DNA - perhaps the greatest scientific achievement of the 21st century - also heralded on the cover of TIME.

Mr. Green's trenchant book and blog, along with articles such as Carolyn Said's recent piece in the San Francisco Chronicle and Leonard Steinhorn's forthcoming book, "The Greater Generation In Defense of the Baby Boomer Legacy," have and will correct abominations in the media.
Posted by Chuck Nyren at 6/19/2005 No comments: