For a few years, David Segal (aka The Haggler) of the NYT has been entertaining me with his tongue-in-cheek essays on seedy business practices.  Every so often he features one of my favorite subjects: Word-of-Mouth Marketing. 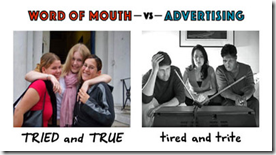 My prediction: When it all comes out in the wash, WOMM will be the best thing to happen to (silly retronym ahead) traditional advertising. Pretty soon, consumers won't believe anybody - even their best friends. They'll realize that they receive the most honest and straightforward information about a product or service from a TV commercial, print ad, or product web site. At least we don't lie about who we are and why we're saying what we're saying … As far as all the claptrap about WOMM replacing advertising - people who are hawking that one have a slippery grip on history.

One more (there are at least a half-dozen):

Manipulation of the Crowd (2010)
As readers of this blog know, one of my favorite activities is WOMing WOMM…

A recent ad posted by “Katmoney” … offered to write convincing negative reviews posted to a Yelp page of your choosing.

A related incident on my blog:

My Blog Was WOMMed! (2008)
A comment showed up in my inbox. I moderate comments before publishing.  Instinctively I knew it stank …  Someone who works at the company left the comment - and here's the most egregious part - trashed their competition … This exemplifies the darkest of the dark side of WOMM.

Internet Hero of the Week (2009)
An uproar hit the Web over the weekend when it was discovered an employee at consumer electronics company Belkin had offered to pay people to write positive reviews for his company's products, even if they hadn't tried them … "Write as if you own the product and are using it," Bayard suggested. "Thank the website for making you such a great deal. Mark any other negative reviews as 'not helpful' once you post yours."