Memo to H.R: Boeing Gets A Bargain

An inspiring article/obit this weekend: 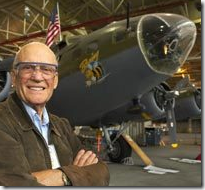 Albert Seifert, 91, worked at Boeing through seven decades
By Atia Musazay
Employees at Boeing's Auburn Fabrication Division remember coming into work at 5:30 a.m. and seeing their most senior co-worker, Albert Seifert, already there, doing what he liked best: building sophisticated tools and equipment.

What knocked me out:

In 2001, he created a highly useful tool — the Laser Trim Cell — a device that employs a laser to cut stainless-steel tubing…

So Mr. Seifert was eighty years old when he crafted a complex piece of equipment.  The original 2002 article from Boeing:

From the B-17 to lasers, Al's been there
By Phyllis Miller
… "Al is one of the guys to whom you can take a project and be assured you will get what you designed," … "He is wonderful in providing the tooling expertise, but also in helping younger designers understand what works in the production environment and what doesn't."

Daniel Nydegger, who has worked with Seifert for more than 20 years, agrees. " I believe that when he comes to work, the company gets a bargain," Nydegger said. "A lot of the engineers come to him for advice because of his longevity and the skill level that he has. If Al suggests something, they listen."

As usual, it all sounds vaguely familiar:

07 May 2010
Memo to H.R: Older Brains = Smarter Brains
… A new book makes the case that our brains can age as well as a vintage French burgundy; many of our most important cognitive functions actually improve with age … as Strauch’s book makes clear … older workers can provide valuable brain power to an organization.

Old Masters and Young Geniuses
"No, I don't think a 68-year-old copywriter can write with the kids. That he's as creative. That he's as fresh. But he may be a better surgeon. His ad may not be quite as fresh and glowing as the Madison Ave. fraternity would like to see it be, and yet he might write an ad that will produce five times the sales. And that's the name of the game, isn't it?"