The Newest No News News

I’m one of the few bloggers to take pride in bringing you no news news.  I’ve been offering my readers no news news for years.

The Newest No News News:

Like most other television networks, NBC Universal aims for younger viewers because advertisers and media buyers pay for viewers in the 18 to 49 and 25 to 54 demographic group. But Alan Wurtzel, president of NBCU Research, says marketers and buyers may be laboring under misconceptions about older consumers.

Where's the TV for us? 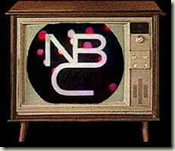 Brad Adgate of Horizon Media and Alan Wurtzel, president of research for NBC Universal, do a good job exposing the silliness of television advertisers (and advertising agencies) targeting only the 19-49 demographic …

That was five years ago.  Now they talk about alpha-boomers or leading-edge boomers:

That group of 55 to 64 year olds are the fastest growing segment of the population and are quickly aging out of the tradition 25-54 demo, making them invisible to ad buyers. Wurtzel says these days, Alpha Boomers are very active consumers who have a lot of buying power, respond to advertising, are tech savvy as younger consumers.

Hmmm. Tech savvy.  That sounds vaguely familiar.  From a post in 2005:

My Favorite Cyber-Myth
How I snicker and roll my eyes whenever I read about Baby Boomers fumbling around on computers, scratching their heads, totally flummoxed. Sure, there is a percentage of any age group that's technologically challenged - but Boomers as a whole have embraced the internet and aren't afraid to plunge into the ether brain first.

Pull quote on the cover of Advertising to Baby Boomers ©2005: 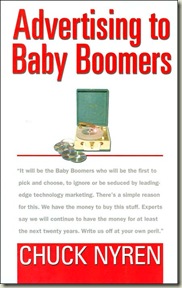 I can’t list all the posts (you don’t want me to, trust me) that talk about tech-savvy Baby Boomers.  Just one more:

Back to the B&C piece & Baby Boomers & Television:

These Alpha Boomers are "an important media and marketing target we can't afford to ignore," Wurtzel said …

The steady glow of the Boom tube

The Media & Baby Boomers: Joined At The Hip

Bookmark my blog for the latest No News News.