Last September I was on a speaking/consulting tour in Europe. One of the stops was Utrecht, The Netherlands at a private business symposium coinciding with the annual 50PlusBeurs.

The symposium was running late. Very late.  Just before I was to go on (an hour and a half after I was scheduled) they asked me to do a twenty-minute presentation instead of my usual fifty.  I did (and wasn't happy with the way it went), then headed out of the conference room with Brent Green, Carol Orsborn, and my More-Significant-Than-I-Am Other to look around.

We'd never seen anything like it. I'd heard what it was, but was nowhere near prepared. Ninety-five thousand people in five days. Over twenty thousand the day we were there.  Six huge halls. Five hundred and eighty exhibits. The sheer immensity was overwhelming.  AARP puts on an Expo every year – but it’s one-quarter the size.

And with only an hour and a half to goof off we only saw about one-quarter of the exhibits, maybe.  The four of us were racing around.  That’s how big it was. Nobody could see it all in one day.

For example, there must’ve been fifteen bicycle exhibitors with at least one hundred bikes to check out - and room to ride them in a demo area.  Next, I climbed in and out of about twenty motor-homes – but never made it to the automobiles or motorcycles. No time.

I never even entered four of the six halls.  One I just glanced in.  It looked something like this: 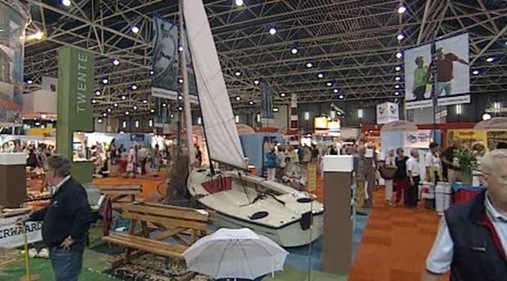 Almost every exhibit was over the top, a show in itself.  Click here to watch a Windows Media Video that gives you a good idea of the quality and variety of offerings.

What’s really amazing about this event is the return rate for exhibitors: 85%. They make money, they know it’s a great investment, great promotion. They know it's a great market segment.

The average age of 50PlusBeurs attendees is sixty-one. So the entertainment and general feel is for a slightly older demographic than Baby Boomers. My guess is that this will change over the next five or so years.

Time was up.  We had to fly to Munich. I was working, not playing (I kept telling myself – for practically the whole two-week tour).

I want to get back to 50PlusBeurs someday so I can really soak it in.

If you are involved in the European 50+ Market, 50PlusBeurs is something you should see.  And don't worry about waiting a year or two if you can't make it next month.  It'll just get bigger and bigger. This year they'll break 100,000 in attendance.  My guess is that the turnout won't plateau for a decade.

Download the English version of the 50PlusBeurs Brochure for 2008.

———
Update September 3, 2008: This post was picked up by the international news service Agetimes.com.