Golly gee, there’s no one big news story I can find to write about.  Or I’m too frazzled to concentrate, or senescently scatterbrained, or to put a positive spin on it all, expertly multitasking since that’s what people do nowadays because it’s impossible to focus on one thing what with all the tech chattering going on all around you.

Baby boomers have earned the right not to be forgotten for their contributions by the new generations…The national conversation will only be a success if it does not forget to engage the baby boomers.

Focus on the right things, and baby boomers are a model.
I would suggest that the perseverance we used to end a war, and to move the country forward using myriad of social, humanitarian and political actions -- could likely be the kind of leadership that is in such short supply today, both here in Minnesota and elsewhere.

Elderly go from being perceived as capable consumer to ‘old person’
“Abbie,” an 89-year-old woman from Texas, told Barnhart when she went to her doctor with her daughters, the physician would only talk to her children.

“If younger people bring you in, they think it’s because you’re not, I guess, lucid enough to understand what they’re saying,” Abbie said.

That seems to be the Doctor’s fault. But what do I know.

Tech startup founders in their 20s and 30s make all the headlines, but when it comes to entrepreneurship, increasingly it’s baby boomers who are more likely to be in business for themselves — and creating jobs in the process.

The end of World War II begot a generation of Americans that’s starting to make waves in the entrepreneurship scene.

This all sounds vaguely familiar: 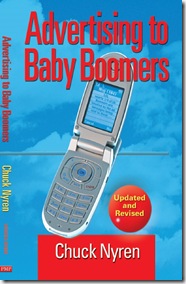 Paramount Market Publishing, Ithaca, N.Y.
… Chuck Nyren's egalitarian approach to advertising and the creation of campaigns is all-inclusive. A large section of the book is dedicated to helping Baby Boomer entrepreneurs get their marketing and advertising up and running. The author as well gives advice and guidance to the small businessperson on how to fashion a handmade campaign.

Entrepreneurs & Baby Boomers II
I’ve found that there are two mistakes made by almost every entrepreneur targeting this unwieldy, diverse market.

Entrepreneurs & Baby Boomers III
Lessons for entrepreneurs? Due Diligence, of course. But not everybody is out to steal your your money with promises of fortunes with their marketing/advertising prowess.

Entrepreneurs & Baby Boomers IV
It's counter-intuitive, but the forever work life of older Americans may turn out to be a good thing for young workers.

Entrepreneurs & Baby Boomers V
The theme contemplated in this session is the enormous opportunity and challenge created by the aging demographics of the United States and Europe.

No kidding.  I can’t keep up with them all.  I tried to years ago:

Advertising to Baby Boomers Can Be Tricky Business
“Here are six slogans, corporate tags, mission statements, whatever you want to call them, for six web sites targeting Boomers.”

You’d better start searching for all these new ones Kevin is talking about because they’ll vanish into the unity before long.