That’s no big surprise if you’ve been reading my blog for the last six years.

… AARP’s new marketing effort will promote the baby boom generation, as it ages, as a viable consumer target for advertisers. The campaign, which includes print and digital ads, will run in trade publications like Advertising Age starting Monday.

In my book ©2005 I questioned their B2B campaign way back when:

NostraChuckus Predicts The Future of AARP 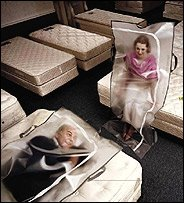 … The advertising campaign has one ad with ashen-faced Baby Boomers in body bags ("These days, doctors don't pronounce you dead. Marketers do."). Another shows Baby Boomers acting like testosteroned teenagers ("Outta the way, punks: older racers are the hot-rod kings!").Yet another has one of a middle-aged lady dead in a powder room (probably from overdoing it on the dance floor) with police chalk outlining her body. I don't know what the copy is because I haven't seen it. It's probably something like, "Give me wrinkle cream, or give me death!"
© 2005 by Chuck Nyren and Paramount Market Publishing

This one is better, although the execution is a tad bland. And I wonder why a profile or link to a recent AARP/Ad Age white paper is nowhere to be found:

The generation that defined youth marketing for Madison Avenue is readying for retirement. Here’s what they’re thinking, where they're spending their money and what marketers should know in order to reach them. Data from AARP's Baby Boomers Envision Retirement Survey, GfK MRI’s Survey of the American Consumer and Ad Age's MarketFinder.

Perhaps because the ad agency had nothing to do with it.  Or an oversight in AARP’s marketing department.  Download the AARP/Ad Age White Paper.

I wish AARP luck with their campaign.  Convincing twentysomething ad agency folk to target anybody but themselves ain’t a cakewalk.