The Millennium web site has a dapper new design
. 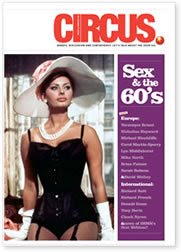 And they’ve tossed up all issues of CIRCUS as PDFs. These are great (and fun) resources for people/companies interested in marketing to 50+. I’ve contributed three or four articles over the last few years.

It’s a long, convoluted story not worth telling in full – but to make it simple …

I sent Steve Hall of AdRants a CIRCUS PDF a few weeks ago and it ended up in the hands of Angela Natividad (someone I also follow). Angela works with Steve on AdRants. She posted about CIRCUS – and mistook it for a consumer lifestyle magazine for people over fifty. It’s really a B2B agency organ:

'Circus' Knows How to Make Use of a Bombshell, Among Other Things
Circus is this brilliant boomer lifestyle magazine …

Then some comments appeared – ones like, “…Thanks for pointing toward this pub. And I totally agree regarding the content and more importantly the attitude” and “LOVE THIS”.

What if something like CIRCUS were a consumer mag? A colorful, outrageous, irreverent, well-written and designed zine without the obvious aspirational claptrap intermixed with ‘you’re getting old let’s show you what you can do about it’ messages? A magazine that doesn’t constantly pander to and insult the intelligence of its readers? Something that (to use an archaic phrase) is ‘cutting-edge’ for people over fifty?

Creating such a magazine has been a fantasy of mine for awhile now. In Jolly Ol’ E, Millennium is doing it – but they don’t know it. (Or maybe they do and we’ll be seeing an English version of my fantasy any time now.)
Posted by Chuck Nyren at 4/05/2008